It is about time that hardcore flight simulation has been brought over to the mobile platform. F18 Carrier Landing II Pro is everything that the genre has except that this time, you do not need a complex desktop gaming rig to run it, just a mobile device. Sure, this takes out any options for multiple screens, surround sound, or HOTAS compatibility, but it also delivers realistic flight mechanics while you are on the go - a feature that desktop fliers certainly cannot provide. But is it “core” enough? Read on and find out.

Through Rain or Shine

One of the best things about F18 Carrier Landing II Pro is the fact that it delivers a visually stimulating game, after all, it is so much easier to get into the feeling of piloting a plane when you actually see it. From the wonderfully crafted backgrounds to the stunning lighting effects (you should see how the entire canopy lights up whenever lightning strikes), to even the carefully animated instrument panels (yes, they reflect real time data in-game), players are brought into the world of flight simulation in a way that one would not expect possible with a mobile device.

So yes, it looks good, but detail is not all there is to the graphics –the presentation actually matters more. The polygon counts for the planes, carriers, and background content are not as high and the textures are not as realistic as they would be on a higher end platform, but thanks to the excellent use of lighting effects, great camera angles, and the skillful animation of the models, it will be easy to overlook the little hardware-based misgivings of the game.

The Tilt has It

During the early days of mobile gaming, the accelerometer quickly became the number one enemy of any sim. From driving to flying, learning to get around virtual worlds with the often-clumsy and over-sensitive tilt controls was a massive bane. Thankfully, it has been many years since and many game developers have come to find ways to adjust tilt to work well –and this game is no exception. Once properly calibrated (and we highly insist doing so), being able to pilot your plane is a pretty fun experience. The onscreen buttons for other controls such as throttle, landing gear, etc, are also easy to access and placed strategically onscreen.

There, we said it, because you cannot have a flight sim review with F18’s without at least one Top Gun reference, and because this game actually puts you into dangerous flying conditions. F18 Carrier Landing II Pro offers 10 planes and 30 different landing missions, so that alone should make you wonder: what kinds of landing conditions are there? Well, once you get past the first few stages of both airfield and carrier landings, expect to get assaulted by strong winds that literally try to push you off course, intense storms with lightning arcing visibly before you, heavy rainfall that lowers your visibility to almost blind, and even dealing with the wrath of exploding volcanoes –yes, it really goes there, and it is certainly worth it.

The Verdict: Go for Pro

While it would make perfect sense to try out the lite version of the app first and unlocking everything from there, the best thing to actually do is once you have tried the demo, get the full unlocked version with everything on it (it is actually a better value than unlocking every single thing one at a time). The cost is certainly worth it with its large range of planes and maps. Add in the excellent way the controls are managed (not perfect, but certainly way better than anything we have seen previously on mobile), and the stylish way the game is presented and F18 Carrier Landing Pro II is certain to make it into most often played list of app games.

Aircrafts You Can Pilot in the Game 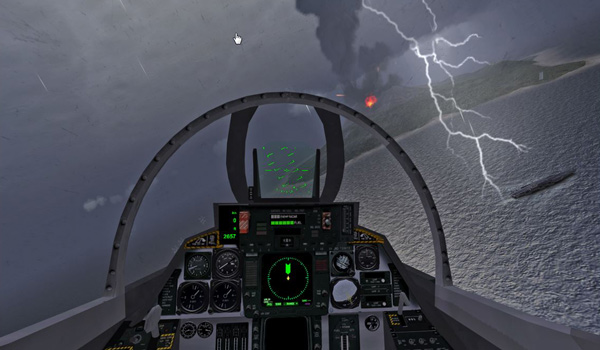