Mayday Emergency Landing is a Panic Overload of Fun

Picking up Mayday Emergency Landing is easy - the app itself is initially free for players to be able to try out what it offers. Off the bat, the first two stages give a pretty solid idea about what this game will be like from one mission to the next: challenge after challenge of crazy landing situations. While the first two maps hardly showcase the tougher mechanics of the later stages, it still manages to be good enough to convince most players to shell out a bit to unlock everything. And this is all thanks to the great way the game’s controls have been configured.

One of the things that Mayday manages to balance properly is the use of tilt control in order to maneuver the plane. It manages pitch and tilt - so players have to mind their hand positioning a lot when playing this game (be sure to use the calibration option as necessary). Add in all the additional onscreen controls for throttle, landing flaps, brakes, and reverse thrust and you get a very control-happy, be-prepared-to-tap-everything, hectic kind of game.

This is most noticeable in missions where you must constantly balance the throttle in order to maintain an optimum speed while ensuring that the pitch of the plane does not deviate from its’ course. Triggering the flap will often change the pitch as it needs to be tapped onscreen –which means one hand should be free (especially so in large devices or tablets), and once the flap is out, it will also affect your overall speed.

It may seem a little too much or overwhelming when you read about it, but the way the game presents these controls feels quite natural, and keeping up with the multitude of things to look out for in the middle of a mission slowly becomes natural the more you play it.

As a commercial airliner, the plane you are flying will have passengers –ranging from small craft to big planes, your passenger manifest will range anywhere from a few dozen to well over a hundred folks whose lives are all in your hands. Keeping them is a matter of keeping your plane as stable as possible during the whole landing sequence. This means that performing maneuvers is not option at all - instead players should fly with slow precision instead of jerking the plane around in order to make adjustments. The good thing is that stages can be played over and over again to decrease the amount of injuries and fatalities in their passenger count. In any case, keeping them safe will also affect your overall rating for each stage.

Through Rain and Fire

While the scenarios presented in Mayday Emergency Landing may seem pretty out-there in terms of extremes the fact is such situations are possible. Helping keeping things real and down to earth are the visuals of the game. We love the simple way that the imagery of landing a plane is presented –all you have are HUD style guides and numbers showing your position relative to the optimum approach. You won’t be paying much attention to the backgrounds, but they are decently made and the presentation of quite dramatic; the sight of a landing strip in the middle of a bad weather feels pretty epic in this game.

The Verdict: Land and Fly Again

While you never get to do the takeoff and other aspects of flying a plane, Mayday Emergency Landing feels quite intense and at some stages, pretty exhausting. That is a good thing since this is a game about emergencies and panic-button-worthy situations, getting the adrenaline rushing without actually putting yourself in danger means that the game is getting its point across. Best of all, the wide variety of missions and situations means that there’s plenty of replay value to be had in the game. 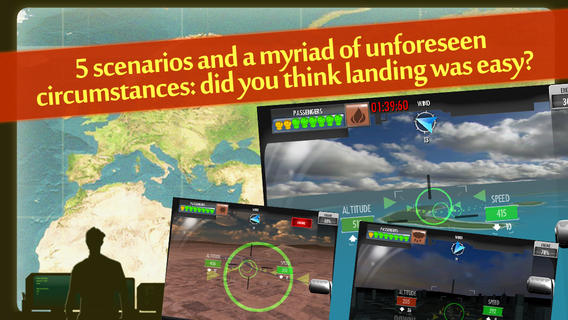