This game is a straight up multiplayer war game that lets you and 31 other players duke it out for team supremacy (divided into two groups of 16). There are a wide range of planes to choose from (also tanks, and ships, it really depends on what you prefer and what the team needs) and the various game modes are designed to cater to both arcade style players and those who like a little realism in their combat plates.

As a game, War Thunder looks beautiful enough to be impressive thanks to its good use of lighting, textures, and well detailed plane models. The action is fast pace and there is a certain sense of speed in the way the visuals are presented. That said, the feel of the game is quite different when you are on the ground commanding a ship or a tank.

One of the things we truly enjoy about this game is that it supports the Oculus Rift. This, and the game's realistic mode, creates a whole new style of gaming that makes the flying feel a lot more immersive.

This game may be an arcade style combat flightsim, but it certainly has a good argument for luring in event the hardcore market: there has never, ever been a game of this scale before this. Battle of Stalingrad may seem like a very event-specific title (and most would assume it would be the penultimate stage in the game). However, the fact is that this game is about the Battle of Stalingrad and nothing more. Yep, this joint game by Russian developers 1C and US publisher 777 studios is all about the months-long campaign that showed how strong the Soviet army was against the Germans.

The map is huge, and is a literal recreation of Stalingrad -complete with military bases, roads, mountains, and many other terrain features that makes it a complete whole. The battles are massive, with plenty of planes in the air and ground troops you have to either engage or support. The AI is well developed and is designed to provide players with a constant challenge not found in other games.

This old school, arcade-style, dogfighting game may lack most of the flashy visuals and fancy graphics of newer titles, but it still manages to deliver a good old fashioned high-speed gaming experience for anyone willing to give it a try. There's no need to buy a brand new HOTAS for this (though if you do have one, why not), since the game's controls are pretty straightforward much like the actual combat itself. You fly, you shoot, you win. Of course, there's also a bit of fancy flying involved especially when you have several bogeys on your tail.

Featuring planes of a much older era, Squadrons of WWII actually lives up to the name and brings players to missions that feel right out of a history book (except they are not -the content of the game is primarily fictional after all). The biggest charm here is the satisfaction level: shooting down enemy planes with your guns is particularly satisfying especially during the later stanges when the challenges start getting much harder.

Players get a whole new take on World War II with Battlestations Midway. The scenes are gritty, the combat is unapologetic, and the pace is immersive and unnerving -and it is awesome. With options to take the fight via warships, subs, and warplanes, gamers are able to take part in various wartime operations in the pacific.

There's plenty of variety to be found in missions -while most will certainly be having players have the luxury of blowing stuff up, some are focused on performing precision maneuvers in order to make tactical strikes on enemies, some require you to take up a more supportive role in a big picture.

Just taking control of one craft is something, but being command of entire fleets is another. Battlestations is a cross between a combat simulator and an RTS game -and learning how to carefully plan the use of your attacks (torpedoes or aerial attacks? flank or disperse?) is the essential key to victory.

Overall, this game pushes the experience of seeing a war from the different perspectives of the people who fight them. Finishing the campaign mode is both an edge of your seat gaming experience and a history lesson rolled into one. 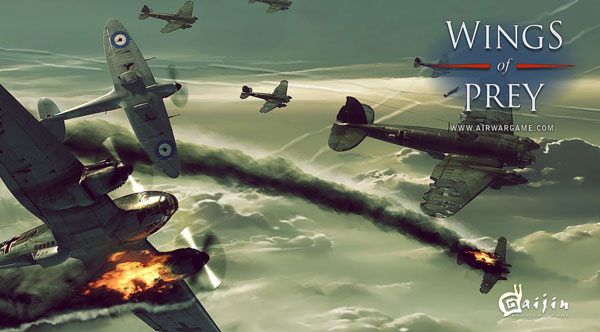 There is much to appreciate with the IL-2 series of games, and Wings of Prey is a great example of why. For those wondering, this game was originally released as IL-2 Birds of Prey, a console-only sequel to IL-2 Sturmovik. Fortunately for the original fans of Sturmovik (which was a PC game to begin with) a PC version was made and that is Wings of Prey.

Wings of Prey is a very graphic-intensive game. While the actual combat mechanics and gameplay are notably great, most of the player focus will be on the visuals. And this is not surprising, as the developers have put in quite a lot of effort into putting in all the little details that makes this game so stimulating to play. From the massive amounts of enemy planes in the sky (and yes, you can try shooting them all down since they are part of the game), to the details on the houses on the ground (a visual factor most other flightsims take for granted), the game delivers plenty of eye-candy.

Carrying forward with the gameplay introduced in the mechanics of its' predecessor, Battlestations Pacific provides solid gaming experiences through different forms: aerial combat with planes, naval battles with warships and subs, and an RTS style approach that has players commanding fleets.

The delivery feels very cinematic (which is mostly the result of clever stage design and excellent camera work), but there are also plenty of moments that are unique to various player experiences. The way that the game allows these events to unfold is nothing short of amazing as it is these little things that ultimately make the game feel truly satisfying.

As anyone would expect from a game carrying Tom Clancy name on the title, H.A.W.X's narrative finds its roots in a very familiar political theme; this time it discusses the strength and impact of the presence of private military companies in the world. Yep, PMCs take the spotlight in this game (much like it does in Metal Gear Solid 4: Guns of the Patriots), but despite the heavy narrative approach, the game still focuses on what's important: dogfighting.

H.A.W.X is an arcade style flyer that shares a similar soul to Namco's Ace Combat Assault series, this is most noticeable in with the inclusion of systems that make the game very accessible to non-flight sim players as well as its action-movie approach to the visual delivery. While certainly lacking much of the realism found in core flight simulators, H.A.W.X manages to deliver a statisfying gameplay in its own way with its faced paced approach to missions and a decently interesting storyline.

The game shines best with its single player campaign that features a few interesting modes of play. Those looking for multiplayer action however, should look to the sequel instead as it focuses heavily on four-player cooperative gaming.

It is always fun to be able to have a wing of sentient players on your side as you soar through skies filled with enemy planes and that is the kind of gaming experience that World of Warplanes offers to its players. Of course, being an online multiplayer title, the game does have its drawbacks. Since it is free to play, there are plenty of advantages to players who can afford to spend a bit in order to acquire the much coveted tier-4 planes (as well as some cash for upgrades and other benefits). There are also some players who treat fighter planes as if they were destruction derby vehicles and fly without regard for personal safety (which is really a bigger issue if they were on your side instead of being an opponent).

These little things aside, World of Warplanes is a pretty wicked online game for those who love arcade style flying. The plane selections are pretty vast ranging from bi-planes to twin engine monsters, and though most of the handling and flying is stripped down to the bare details and plane performance is hardly anything grounded to realism, the stats and tier systems do make the relative strengths and weaknesses of the different models a little more reasonable.

H.A.W.X 2 is a pretty decent game with its impressive graphics, solid gameplay system, and its' stripped down version of flight simulation (which is pretty much akin to straightforward arcade style flying). Combat is very flashy and easy thanks to player assisting features that makes tracking down targets and ensuring that your missiles hit more convenient. While this may not appeal to core flight sim fans, there is certainly a huge market of players who just want to fly and shoot to their heart's content. Oh, and as expected of a game with the name Tom Clancy in the title, this one pits you against a new terrorist force (some Russian group or something, but you will be too busy shooting down bogeys for that to matter at all)

As good as the game is, one of the things that many players will certainly notice is the significant rise of mission difficulty levels once you get past the first half of the game (even the first one-third actually). Enemy fighters have a strong tendency to help each other out and keep you too busy dodging to even get a decent lock on a single target. While it is completely possible to get past this stages, it is certainly not without a lot of skill and patience. This is where the game's 4-player cooperative mode shines. The good part is that you can bring along up to 3 other buddies to your campaign and they can replace your squad of mostly useless AI wingmen.